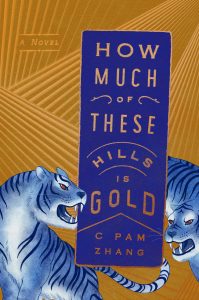 Beginning this month, the Library is launching CoCo Reads, a countywide read of the book “How Much of These Hills is Gold” by C Pam Zhang. The program will run from September 7 through October 28, 2020. CoCo Reads is a community reading program that attempts to get everyone in the County to read and discuss the same book. The program includes several virtual events that compliment the themes in the book, as well as a discussion with the author.

The debut novel by C Pam Zhang has earned her a Booker Prize nomination, glowing reviews in The New York Times, The Washington Post and many other publications, as well as making it to the BBC’s best of 2020 list.

The book takes readers into California’s gold rush seen from a new perspective, that of two recently orphaned Chinese American children. They travel into the hills in search of the perfect burial spot for their father and encounter many challenges along the way. The novel is about conflict between two siblings, their battle with their own memories and the illusion of the American Dream. Reviewer Martha Southgate wrote in The New York Times, it is an “aching book, full of myths of Zhang’s making (including tigers that roam the Western hills) as well as joys, as well as sorrows. It’s violent and surprising and musical. Like Lucy and Sam, the novel wanders down byways and takes detours and chances. By journey’s end, you’re enriched and enlightened by the lives you have witnessed.”

The author will join a virtual presentation via Zoom on October 28 at 7:00 p.m. Other virtual events include a talk about the history of immigration law in the United States with renowned University of San Francisco law professor Bill Hing, a book club discussion, an introduction to the newly released book “San Francisco’s Chinatown” by photographer Dick Evans and writer Kathy Chin Leong, and a presentation from the Asian Art Museum titled Hidden Meanings in Chinese Art. Dates, times and descriptions of each event are available here or by visiting ccclib.org. A recorded version of each event will also be available on our YouTube channel (theccclib) two days after the live program.

The book is available as an eBook or eAudiobook in OverDrive or with the Libby app, and also in regular print and large print.  If you want to read similar titles, check out the Readalike list by CCCL_TeresaR, which has both fiction and nonfiction. CCCL_EmilyK has a Readalike list for adults with just fiction titles. CCCL_KelliN and CCCL_TeresaR have created a list of coming-of-age titles for teens and the immigrant experience. For more information about the history of the gold rush you can look at CCCL_KelliN's list All That Glitters: Gold Rush Sagas for Kids and Golden State of Mind: A History of California Books & Movies for Adults.