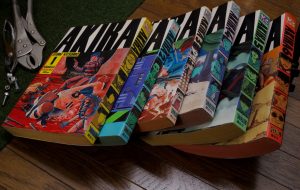 There are many different countries that produce comics and graphic novels, and they all have their own unique ways of doing so! Here are just a few of the different comic book styles from around the world:

Manga – native to Japan. The first Japanese manga artist to become famous in the West was Osamu Tezuka, who created the Astro Boy series, among many others. Since then, it has evolved into stories on every subject for literally all ages! Manga is serialized in giant magazines (the size of an old-fashioned phone book!) on a weekly or monthly basis. The most famous is Shonen Jump, aimed at boys, but there are many more. The chapters are then collected into volumes called tankobon, and the pages read from right to left, although some earlier manga published in English was “flipped” to read left to right.

Manhwa – Manga's Korean cousin! These books, similar in style to manga but with a distinct content, read left to right like Western comics. The subjects range from action to romance and everything in between.

Bandes dessinées – in France, Belgium, and other parts of continental Europe comics are large, full-color, and collected into hardback volumes with beautiful illustrations (reading left to right, although the titles on the spine read bottom to top). These are also for all ages, although primarily for children, and many have been translated into English.

There are so many great comics and graphic novels out there from all over the world – and again, these are just a few of them. Check them out!