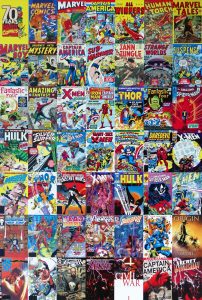 There is a common misconception that comics and graphic novels are “just for kids:” superficial, full of nothing but cape-wearing heroes, and with no literary or cultural value. Leaving aside the insult to our beloved superheroes, comic strips and graphic novels have provided food for thought for adults for quite a while, from underground to mainstream. Here are just a few of the many titles to explore.

Maus - Art Spiegelman started out doing underground comics, but he created Maus as a way to relate his father’s story of surviving the Holocaust. Although the characters are anthropomorphized – Jewish people are mice, Germans are cats, etc. - this in no way detracts from the story’s impact, and in many ways adds to the dramatic effect.

Persepolis - Marjane Satrapi grew up in Iran at the time of the 1979 revolution. Her story of growth, love and loss set against the backdrop of massive upheaval is compelling and beautifully realized.

Lone Wolf and Cub – Kazuo Koike’s epic tale of a wandering former executioner and his son is not for the faint of heart, but this flawed hero can be tender as well as brutal.

Watchmen – Alan Moore is famous for many graphic novels aimed at adults, but this dark tale of less-than-perfect superheroes in a deeply flawed world is probably his best-known, and definitely one of his best.

Political cartoons: from Thomas Nast to Garry Trudeau, many cartoonists have used their art to make subtle and not-so-subtle commentary on the political issues of the day. These can range from one panel to several, but they always manage to get their point across! While there are too many such artists to name, many periodicals, such as the New Yorker, are known for the quality of their cartoons.