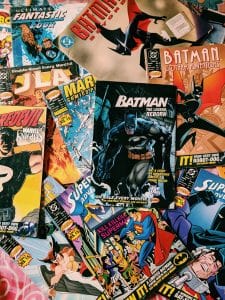 By now many people have heard of Free Comic Book Day: Children and grandchildren beg to go to events, libraries host programs, and folks in costume show up in parks, amusement parks, museums, and on the street. Comics are everywhere, and their popularity grows, but it hasn’t always been this way.

During the late 60’s and early 70’s comic book sales were higher than they are now. That was short-lived. For nearly 15 years, sales declined and flattened to a point where the two largest publishers (Marvel and DC) nearly went bankrupt.  Similar sales issues for different reasons happened in the 90’s as well.

In jumps Joe Field. Joe had been in marketing and loved comics, and in 1988 decided to take the plunge into direct sales - that is, he opened a store. You know it as Flying Color Comics & Other Cool Stuff, right here in Concord.

In the late 90’s and early 2000’s when many retailers were getting out of the comics game, Joe was building his store’s reputation and decided that there needed to be a way "to reach out to new comic book readers, to call back former readers and to thank current fans.”

In 2001 Joe wrote about his idea for a Free Comic Book Day in an article for Comics and Game Retailer magazine and it has continued to grow ever since. Joe’s efforts to match each person with a comic can not only be credited with rebuilding much of the comic book industry, but with encouraging reading for a whole generation.