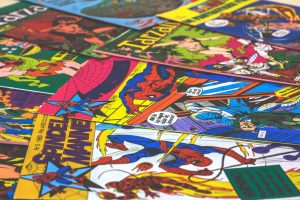 Many people still get a “bad taste in their mouth” when thinking about comics. Why do we as Americans have such mixed emotions surrounding the topic?

Prior to 1954, comics covered a variety of topics, including horror, crime, super-heroes, politics, etc. Many were just read for entertainment. Much of the controversial content was done in the name of realistically portraying the human condition, some to criticize government and authority in general, or just good suspenseful storytelling that was allowed in other print media.

After World War II there was growing concern within many communities around juvenile delinquency, anti-government sentiment within the youth, and ultimately liberal views often identified as “Communist” or “Socialist.” As this concern grew, cities, especially in the South, banned the sale of horror and crime comics, while Los Angeles’ ban was ruled unconstitutional. This and other decisions did not stop comics from being publicly burned, or groups from pressuring government and families to be vigilant for the “Horror in the nursery.”

During the McCarthy Era, the Senate Subcommittee on Juvenile Delinquency was formed and held a series of hearings specifically on comic books and their contribution to delinquency. The press surrounding this was so negative that the comics industry formed a voluntary group called the Comics Code Authority which self-censored materials. Many publishers broke with the group after 2000, and by 2011 the code was defunct. Prior to the Code, some titles sold in the hundreds of thousands per issue and were in almost every household. It is estimated at their height in 1948 that as many as 100 million comics were sold monthly (the population then was 146 million); at this time, the United States was also at an almost all-time low for illiteracy, just 2.7 percent, compared with today, at nearly 20 percent. Let’s encourage reading and grab a comic.