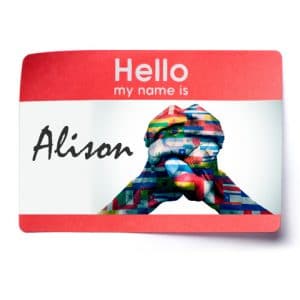 Hi, I’m Alison Michele. Most people call me Alison, my close family calls me Ali, I’ve been known to respond to Al.

Also, I’m Black. African American, Afro American, person of color, and, more recently, BIPOC, an acronym for a whole group of brown people: Black Indigenous People of Color. If you’ve been around a while, you’ll notice that the ways we describe ourselves change with the decades, and to me, that’s ok. We’re always learning, always growing, always finding new ways to describe ways of being that are descriptive, powerful, and inclusive.

Like Latinx. This is a term used to describe people of Latin American descent, “encompassing those who don't identify as male or female or who don't want to be identified by their gender”. Preceded in the United States by Hispanic or Latino: technically Hispanic refers to people from Spanish speaking countries, while Latino/Latina includes Portuguese speaking Latin Americans. Latino and Latina also inherently call out a person’s gender. If you don’t identify as male or female, or just want a term that leaves out gender altogether, you might use Latinx.

It sounds complicated. But it’s not, really. None of these terms are meant to offend. They are like the English language, which continually absorbs official, and unofficial, new words, adapting to changes in the world around us.

This month we’re celebrating Latinx Heritage Month. Honoring those whose heritage descends from Latin American and/or Spanish and/or Portuguese speaking countries, male, female, and everything in between and outside the lines.

We invite you to join us in the celebration, which, if history is any indication, might be called something entirely new by the time we check in next year.

Who is Latinx and What Does It Mean?

Hispanic vs. Latino vs. Latinx: A Brief History of How These Words Originated

The Problematic History of the Word "Hispanic"

Few Latinos Call Themselves ‘Latinx,’ Which Is Why It Will Never Catch On