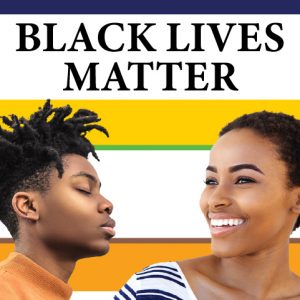 As a Library, why do we say “Black lives matter”? This is a question that has been asked of me several times in recent  months by various members of the public and library staff. Simply put, it’s important to explicitly say “Black lives matter” because, like many public institutions in this country, libraries have a racist history towards Black people.

It wasn’t until 1896 that Black Americans in the South could have access to libraries, but only with the caveat that they had to provide their own library services and books. Prior to 1896, Blacks weren't allowed in any libraries in the South other than to pick up or return books for white patrons and weren’t allowed in the same libraries as white people until 1954. In the North, Blacks were also prohibited from using libraries, but starting in 1828 many African American literary and library societies were started in order to meet the need.(1)

In terms of library staff, it is much of the same history. Public libraries in the U.S. were largely started and run by local women’s clubs that by and large excluded membership to anyone who was not white.(2,3) Library staff in the U.S. still largely reflect this demographic. (4,5)

Part of the healing and reconciliation of this racist legacy is to acknowledge that it exists, understand how it has shaped who and where we are now and take corrective actions. Part of taking corrective actions is to state that Black lives do matter to libraries even though we have a racist history. By saying “Black lives matter,” we are acknowledging our racist past while at the same time explicitly inviting in people who have historically not been welcome or who have been barred from taking advantage of what public libraries have to offer.

At Contra Costa County Library, we are committed to doing the hard work of examining the library’s historically racist past as well as our current practices that were built upon that past and taking corrective actions so that we can move beyond perpetuating inequities. This will be a long road and one that I am personally committed to engaging in for the rest of my career.